A colleague of mine was searching for the definition of Vine when this happened, I think you can see such event once in a lifetime.... (click Image for larger view) 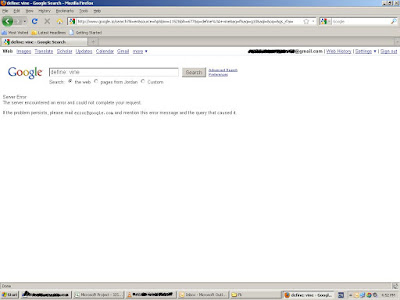 "Hello Adi, I need to talk to you, you need to travel to Ethiopia for a meeting with a potential customer".

Packed and ready, few days later, the day of departure, I opened the demo laptop and Oops,... its the blue screen of death, My flight is in 3 hours, hold on I got email, I got 10 hours...Good.

Prepared another laptop, went to get my ticket... it was not ready yet, The customer promised that my visa is at the airport, waiting for me to come in my shining armor, riding a unicorn and coming for the rescue, "You have to go now... the flight is at 18:00 not 20:00, you will receive an SMS with the ticket No. on the way. 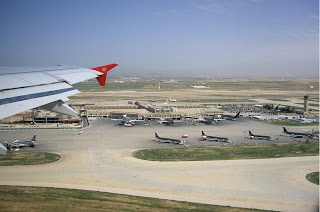 On the road now, TEET TEET, I got it, 2 numbers, no other data, I called the sender, Its Terminal 2 with Gulf Air, got there, and it wasn't terminal 2 and neither Gulf air, disappointed but in a hurry I got to the right place. an ambitious young guy behind the ticket counter looked at me and said:
-Him: you are going to Bahrain!
-Me: I know that
-Him:Where are you continuing afterward
-Me: Addis Ababa"... I answered with a smile, It means "the new flower" the highest city in Africa, with a cool weather and no diseases.
All I had was my passport, an invitation letter and a promised visa, the RJ employee nicely told me that they can't let me on board without a visa, but finally they let me in but after signing a paper indicating that I am traveling upon my own responsibility, I headed to Bahrain with excitement. 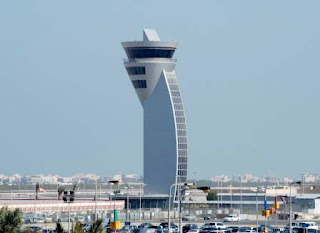 I arrived to Bahrain's airport, the plane started to go down over water, scary but promising. After the safe landing and the really strong brake that threw me in the air hanging with a seat belt, I went to get my boarding ticket, " the plane is at 4:15 ... 8 hours from now", I was told to come back at 12:00, I went up to the duty free area; the only slightly entertaining place in any airport.
Seconds passed like hours, hours like days, I did all the required work and it didn't pass 11:00 yet, got medication for my sore throat. At midnight I went back to the ticket counter they told me to come back at 1:00 am, I spent that hour fantasizing about taking off my shoes.
I went down stairs again, the airport representative printed my ticket, "hold on he said, where is your visa?" I explained that I have an Invitation letter and the visa is waiting for me at the airport, they refused, I made calls to Jordan, Lebanon and Ethiopia to put my manager and our partners in the picture, I gave the phone to the person in charge at the airport to talk to my manager after I woke him up it was a short conversation, but still no is a no.
I asked the airport employee to call Ethiopian airlines and ask them whether or not I had a visa, he agreed but kept me waiting for 3 hours , he came back, made me sign a paper that I am traveling on my own responsibility and gave me the ticket, My flight was delayed from 4:15 to 4:45, thank god this happened because I was at the gate at 4:20.
Got on the plane which was not what I would call "Tidy" I never heard of a "very strict economy" airplane ticket, where it is free seating... have you?
Finally I got some sleep, when all of a sudden a really strong light woke me up, it was so intense and so warm, I opened my eyes to see the most amazing view ever, sunrise over and ocean of clouds, it was like the emergence of the obvious truth.
Once we approached Ethiopian airspace the land was like millions of green carpet pieces of all shades of green, with dark black soil than appeared from above in spite of its small size, small rivers emerged from lakes, going distances to merge with other small that finally feeds almost half of the longest river in the world "The Nile" I was so excited to go there and see in closely.

I got to the airport and Voila ... There was no visa, the customer sent someone to solve the issue but he disappeared, my passport was taken from me and I just waited at the terminal for 15 hours, in the first 3 hours I was contacting the other person who arrived to Ethiopia, the airport staff told me they are sending me to Bahrain the same night, If that happened I would wait at the airport for around 18 hours until I go back to Jordan. 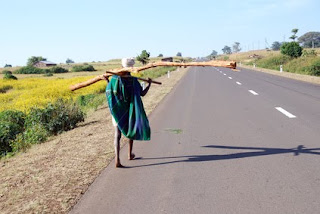 I convinced them that I can go to Lebanon and that I can manage from there to go back to Jordan, they approved, but refused to give me back my passport " got it back later but when I was on board".

I kissed my passport ... there is no place like home, things went really smooth at the Lebanese airport and the flight was good as well, I went back by car to Jordan it took less than 5 hours, it was so good to be home but still because I couldn't achieve the mission I went for, I still wish I can go back and give it a retry.

Lesson learned: Travel can be good for weight loss!.