The unlucky lucky me!

Well , I was writing the unfortunate events that I have had this week, but after I realized that I spent 30 minuets talking about only one incident I realized that it will take me forever to say them in details. 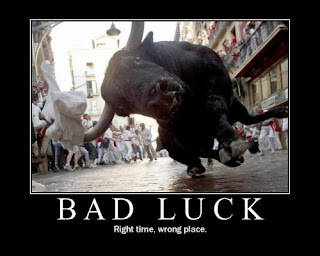 1- I lost my mobile 5 times " yes five..it was lost once and it took me from Saturday to Thursday to get it back home".

4- had been waiting for a bad thing that is going to happen but I can tell you what! "I can't means that I won't..even if you ask..sorry"

5- got stuck in the elevator once and on the way out i almost got cut into half...who on earth would design and elevator that has hidden blade doors that close so fast even if someone was in the middle.

6- Was waiting 3 days to eat my frozen meal that turned out to be the worst meal I ever had.

7- Had to be away from people I love.

8- Had minimum or no contact with people around me!

9- I almost missed the bus because of a long delayed meeting! " i had to run like forest gump"

and What makes me wonder about is the fact that i still wake up every morning , I look at the mirror with a smile and lie to my self by saying " today , everything seems to be OK!!!" and I go to work convinced in this fantasy!... so stupid of me..I know
yours,

This story is symbolic

There was A princess ,
she was waiting in a place,
where she lived happily,

She fell in love,
she was as peaceful as a white dove.
she had all she wants in this love.

But an adviser came up with a thought,
and to the palace a young prince he brought,
and the king never cared for what the princess thought.

Her man needed time,
for all he can afford is bread and thyme,
and he didn't have a dime
to be with what he called " the love of mine"

The princess was forced to see the young prince,
the peasant lover was overwhelmed with anger
"how come this prince thinks he can claim what is mine?" he said
"for maybe I'm not the best... but I would Cherish my queen the best"
"its not the crown,
its not the fame...
its the tear I drop whenever she looks away..."

the prince left the palace and he shall wait and may reappear,
when the lover and the princess shall wait in suspense fear!!!

Note: this poem may mean different things to different people, it is about "someone else" that is trying to take what is "something" from you, It may remind you of reoccurring incidents!!!

Email ThisBlogThis!Share to TwitterShare to FacebookShare to Pinterest
Labels: the princess and the lover 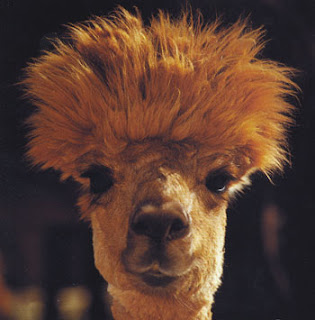 People always hope for a good hair day, and when they are upset they say " having a bad hair day",Well... Today for me was a "strange Hair day".

Today was the first day in the rest of my life (of course it was... but had to start somehow!).

I came to work, started a task that was assigned to me yesterday end of the day, I was actually glad because I prepared all the items I need for the task since I didn't have time to actually start with it, and things went smoothly... Until... KABOOM; I found that the template I take as a reference for my review tasks has been changed ; it kinda became a whole new document that needs restructuring.

Two months ago; such incidence would have caused me to announce "code red " in my "Brain department" and start seeking a contingency plan.

Today the little Adi behind the fancy desk that is behind the red velvet curtain inside my Brain Department yelled : " Assess then react!!!" , so I decided to proceed as before since the task was initiated according to the older Version and no notification was received by my side.

It is quite strange, I finally reached a point where I can make a decision that has consequences, although I might be blamed for it, but I have to start at some point!!!

Another incident; I went down with a colleague to smell a bit of fresh air " as in the Opera O Sole mio (l'aria freska)" , we were talking about a graduation project for a university student we saw few months ago, it was an alarm clock that sprays water when it rings then it runs away... my other colleague was saying " I swear to God, if it throws Water at me I will *#$#$%&%$" when suddenly a huge amount of water fell on both of us from a window.... Yes people... KARMA exists!!!

And finally I went to a restaurant and the waiter was strangely nice to me.. I even thought he was gay but it turned out that he is nice to everyone. But really he was nice in a scary way, He refilled my soda free of charge without even asking!... is there still such nice people in the world?!.

Advice: strange hair days are the most worthy of being documented!!!